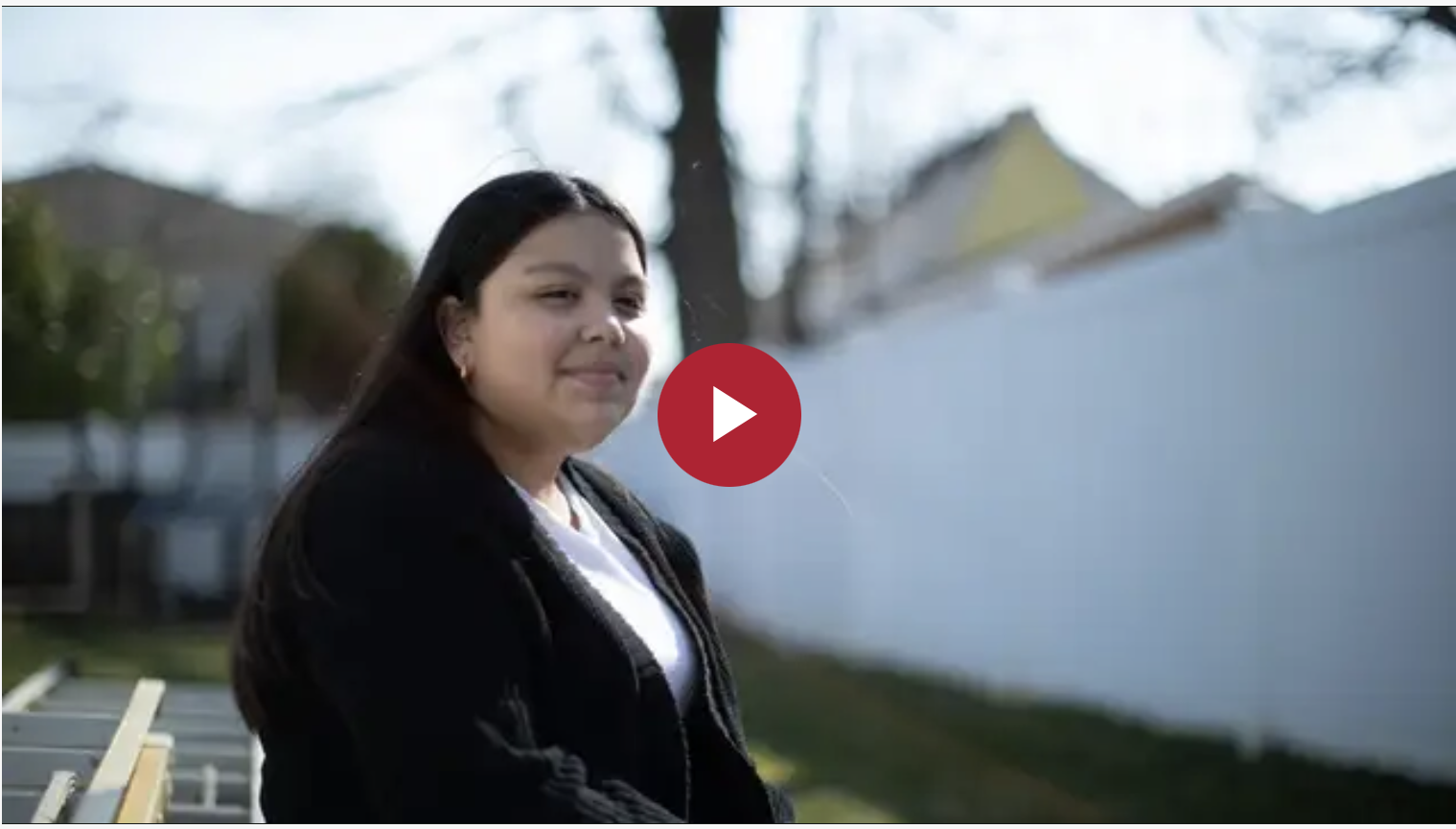 Click here to watch the interview with Ashley Rivas

Ashley Rivas had to grow up fast during the pandemic.

At age 15 in early April 2020, she shielded her 8-year-old sister from the details of their mother’s hospitalization due to COVID-19, a newly known virus that also had forced schools to close statewide.

When their mother was in the hospital, the teen helped her father sanitize the house and washed clothes for the family. She also took on the role of caretaker for her sister, helping her with homework in between their online classes. After her mother was released from the hospital two weeks later, she brought her food and cared for her while she was recovering.

“I was trying to keep my house together with my mom being sick and trying to be the next her,” Rivas, a Hempstead High School senior, recalled.

Rivas, now 17, is expected to be among about 35,000 Long Island students graduating in June, representing a milestone for a class that has weathered two years of pandemic learning. The students Newsday spoke to said they matured faster during the pandemic, when they had to take care of family members sickened with the coronavirus, and became more disciplined because of their virtual and, later on, hybrid schedules.

Some seniors said they have gotten back to normal since the school mask mandate ended on March 2. They look forward to resumed field trips, get-togethers with friends, the prom, graduation and adulthood. Others noted school is still not the same amid the uncertainty, lamenting lost opportunities to grow friendships, along with the missed basketball games and concert rehearsals that could not to be rescheduled.

“There is that … general anticipatory anxiety that ‘I’m excited for college’ or ‘I’m excited about the next step,’ but ‘I’m also anxious because I don’t know exactly what to expect’ ” in any given senior year, she said. Now, “It’s more intensified.”

‘Stronger than I thought I could be’

In the spring months of 2020, Rivas was struggling.

“The teachers didn’t really know how to work with Zoom; my mom was in the hospital, I think. And then it was also around my birthday,” she recalled. “Everything was just falling apart.”

Because school was virtual and New Yorkers were urged to stay at home, Rivas found herself with a lot of alone time.

One day when scrolling TikTok, she saw people crochet. She had never done it before but decided to give it a try. She bought some yarn and watched tutorials online. Soon enough, she made a bee plush and put it on Etsy. It sold the next day. She sold about 20 more later.

Rivas always has been interested in business. When she was a first-grader, she sold purses made out of duct tape to her classmates for $3 apiece. She also has considered becoming a schoolteacher like her mother did in her home country of El Salvador.

Her bee plush success helped crystallize the path she wants to take. Rivas said she plans to study business administration or economics for her undergraduate degree, though she’s yet to choose a college. National College Decision Day is May 1.

The experience also taught her something else.

“I think I matured a lot quicker,” she said. “It made me realize that maybe I hadn’t known who I really was. There were parts of me that I didn’t even know about. … I’m stronger than I thought I could be.”

To protect her mother, who still has a dry cough, Rivas continues to wear a mask in class for the most part.

“It’s still not the same,” she said of school. “It’s always in the back of your mind that there’s a global pandemic going on. And you have to be careful.”

Had to become a ‘mini adult’

Zakkiyya Fraser, 17, a senior at Valley Stream Central High School, remembered looking to adults for answers in the early days of the pandemic.

And not getting them.

It took Fraser some time to learn to accept the unknown. “It’s like you become a mini adult,” she said.

“The pandemic may have made us grow up in a [different] way,” she added. “Having that mindset of still being a child but having to function almost as an adult has been very challenging, I think, for all high school students.”

When school turned remote and, later on, hybrid, Fraser said she pushed herself to become more independent. The routine structured by a typical school day was no longer there, and the inconsistency of learning online was difficult for her to adjust.

“Being on the computer is like, not necessarily that you’re forgotten, but much harder to connect in the classroom,” she recalled. “It’s harder to grasp the content. It’s almost like you’re there, but not there.”

“We didn’t have a school schedule to keep us on track. We needed to manage our own time without a bell,” the 18-year-old said. “We didn’t have teachers to ask questions to. We did, but it was much harder to communicate.”

Still, Hua said he feels “overwhelmingly lucky” compared to other student cohorts who were affected by the pandemic differently.

“There were seniors that had their final events taken away. They had no prom. They had no graduation,” Hua said. “Then there are younger kids that never had a first year of kindergarten. … Honestly, I feel very thankful.”

Timothy Hogan, a senior at East Islip High School, didn’t begin to appreciate school until it was shut down.

Before, it was like “you can’t wait to leave,” the 17-year-old said. “With COVID, it made me want to go to school in person.”

The pandemic also has taught him that the things he used to not give a second thought are not a given.

“Whether it’s family, school, your friends, going out to see a movie or to shop, you can’t take those things for granted,” Hogan said.

Those first few months of staying at home allowed him to spend more time with family, an experience that confirmed his desire to stay in or near New York when choosing a college. “It reinforced the idea that I wanted to stay home,” he said. He’s yet to decide which college to attend.

Looking back, Frankenberry felt like part of his high school years was stolen.

The better part of “my second half of sophomore year just didn’t exist,” the Garden City High School senior said.

His junior year was spent under such heavy restrictions — plastic shields around desks, social distancing and masking — that he said regular interactions were greatly reduced.

“It’s unfortunate,” Frankenberry said. “Definitely a little bit upsetting. It’s a shame that [we] couldn’t get the full experience.”

Frankenberry is hanging out with his friends as much as he can and planning social activities — almost as if to make up lost time.

“I can’t say I’m trying to fix everything,” he said. “You’re not going to be able to make all that time back. But you have to enjoy what time you still have left … before graduation.”